The most desired music festival on the Hawaiian Islands has announced its 2016 lineup for Oahu and Maui.

The MayJah RayJah Music Festival is back for the 2016 edition. Over the last six years, the Mayjah Rayjah Music Festival has become a must see event for locals and visitors to Hawai’i who identify themselves as reggae connoisseurs and music lovers alike. This year’s festival features some of the premier talent in the roots-rock-reggae genre, past, present and future. 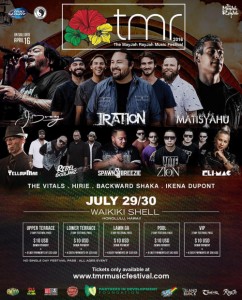 Headlining this year’s MayJah RayJah will be J Boog, returning to festival for the 2nd time, Iration, performing in their home state for the first time since 2013, and Matisyahu, a first time performer at the MayJah RayJah but frequent performer in Hawai’i. Also featured on the deep lineup will be Jamaican dancehall legend, Yellowman, Sons of Zion from New Zealand, California’s Spawnbreezie and Hirie, Hawaii’s own Rebel SoulJahz, Eli-Mac, The Vitals, Backwards Shaka and Ikena Dupont.

This year’s MayJah RayJah will takeover the Hawaiian islands of O’ahu and Maui on July 29th and 30th. As in previous years, the festival’s lineup will be split over two days and two venues, taking place on two
separate islands.

For O’ahu, the MayJah RayJah will once again be held and the renowned Waikiki Shell, while Maui’s edition will be held in Kahului at the Maui Arts and Cultural Center.

Tickets for the MayJah RayJah go on sale April 16, 2016. This year, there will be no single day tickets available, only two-day festival passes for each island. However, on April 16th, patrons can secure their tickets for a $10 down payment. Four payments, ranging from $23-$56 for general admission to VIP Passes will be necessary, as well.

The MayJah RayJah Music Festival is, as always, all ages and family family friendly.

If you are on the mainland United States and wanting a sneak preview or a small taste of what the MayJah RayJah embodies, Las Vegas will be the site for The MayJah RayJah Music Festival on April 8th.

For more information on the MayJah RayJah, follow the links below.