Mana Maoli will premiere their latest edition of their song across Hawai’i series with Playing For Change.

This particular song is special to Hawai’i. Originally, Mickey Ioane composed “Hawaiʻi ’77”, a mele Aloha ʻĀina that quickly spread across Hawaiʻi, when the Makaha Sons of Niʻihau recorded and popularized the song as “Hawaiʻi ’78”. Israel Kamakawiwo’ole “IZ” further took the song beyond Hawaiʻi’s shores. 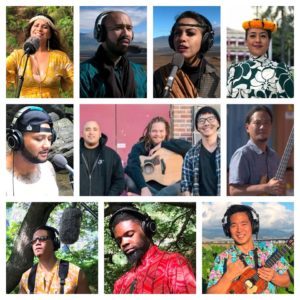 Now, over forty years later, hundreds of students from 14 schools, and 40 artists and musicians recorded this song live at 29 locations on four islands.

From underground to well-renowned, these artists are among over 200 ‘Mana Maoli Collective’ musicians, engineers and filmmakers who donate their time as role models and mentors to our youth, as part of the Mana Mele Project.

This is more than just an incredibly emotional and heart-wrenching music video. This is roots and culture of Hawai’i, past, present and future.

For more information on Mana Maoli and the Mana Mele Project, follow the links below.