A mainstays within the reggae-rock genre, Hawaii’s own Pepper, will be releasing a brand new album this summer.

Pepper is the true definition of the American dream. Formed on the Big Island of Hawai’i in 1997, the trio of high school classmates, Kaleo Wassman (guitar/vocals), Bret Bollinger (bass/vocals) and Yesod Williams (drums/vocals), at Konawaena High School have carved out a very successful niche in the ever expanding reggae-rock genre. 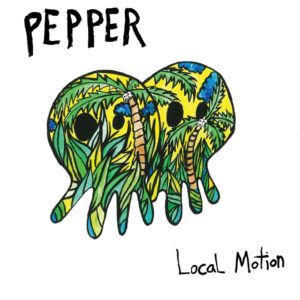 When the band quit their jobs in Kailua-Kona, and decided to jump head first into the music industry, no one could have envisioned this outcome: a veteran band with a loyal following about to release their 8th studio album, Local Motion, on their very own label (Law Records).

Over the course of Pepper’s career, multiple albums have seen mainstream success on the Billboard charts, including In with the Old, No Shame, Pink Crustaceans and Good Vibrations, among others. However, none of the band’s album releases has experienced the same amount of success as the 2002 release of Kona Town.

The album that spawned the radio hit “Give It Up” and live show staples “Stone Love”, “Stormtrooper”, “Ho’s” and a handful of others, will be hard to replicate. But, Pepper’s upcoming release, Local Motion, is said to be a return to their Kona Town roots.

Looking for a more stripped down approach to recording at their own Kona Inn studio, Pepper teamed up with multiple producers while compiling the ten track album, including Noah Cronin of Sea Major Seven, E.N Young of Imperial Sound and Scott Woodruff of Stick Figure. The first single off the album features a collaboration with Stick Figure as Scott Woodruff lends his lyrics to a good portion of the summer ballad, “Warning”.

The whole album is loaded with collaborations, including Micah Brown of Iration, E.N Young, Henry Fong, Jinco, as well as the aforementioned Scott Woodruff of Stick Figure.

Following the release of Local Motion on June 28th, Pepper will be touring with Iration, Fortunate Youth and Katastro on the Live From Paradise Tour!