One of the biggest names in American reggae will embark on a tour, scheduled around their Red Rocks performance.

Beginning in Massachusetts, but now calling California home, Stick Figure could very well be the next big name in the reggae genre. Prior to the release of the band’s breakthrough album, Burial Ground (2012), Stick Figure was known as a studio recording band, as founder, multi-talented musician, singer and producer, Scott Woodruff, would sparingly perform at local venues. 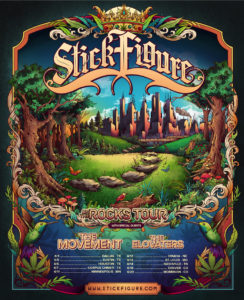 As the Stick Figure name began to make headway in the genre, Woodruff hit the road with a touring band comprised of Kevin Bong (Keyboards/Vocals), Kevin Offitzer (Drums/Vocals) and Tommy Suliman (Bass). The band has since expanded its catalogue with their most recent release Set In Stone (2015), and incorporated a more complete sound with the addition of Johnny Cosmic (Guitar/Keyboards/Vocals) to the band’s road show.

Subsequent tours saw Stick Figure sharing the stage with Slightly Stoopid, Iration, Tribal Seeds, The Green, and many more. With steady growth over the years, Stick Figure has cemented their place as headliners in the reggae genre.

And, the band has been known to sell-out venues to their full capacity well in advance of their show dates.

The latest well-in-advance sell-out might be the band’s biggest feat to date. Stick Figure has planned their On The Rocks Tour, leading up to the headlining performance on April 20th at Red Rocks Amphitheatre in Colorado.

The big showcase for Stick Figure will also feature special guests, Pepper, Steel Pulse, The Movement, Iya Terra, as well as comedian Nick Swardson. Even the nearly 10,000 person capacity at Red Rocks Amphitheatre was not sufficient enough to meet the demand for Stick Figure and the reggae genre. 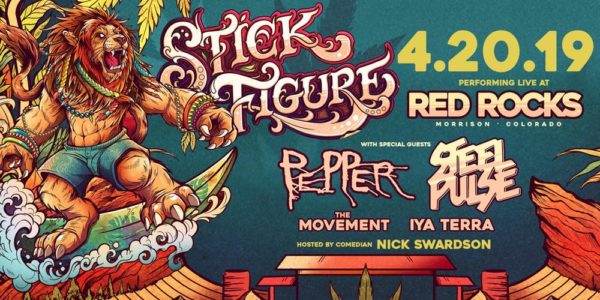 But, there are plenty of other opportunities to see Stick Figure live this spring.

Stick Figure will begin their On the Rocks Tour on April 4th in Texas, before performing live in Minnesota, Nebraska, Missouri and Tennessee. The On the Rocks Tour will featuring supporting acts The Movement and The Elovaters.