One of the most polarizing performers in reggae history, returned to Jamaica for his first performance in 10 years.

Since the release of Mark Myrie, better known as Buju Banton, fans traveled from all corners of the earth to witness his first steps onto the stage. Ten years ago, in Miami, Buju Banton was arrested and later charged with conspiracy to distribute cocaine. Buju Banton, served his time and was released on December 8, 2018. It has indeed been a Long Walk To Freedom. 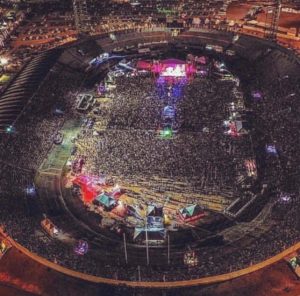 Being away from reggae music for nearly ten years, did not allow people to forget about Buju Banton. Fans from across the globe descended upon the Caribbean island. Jamaica’s airports and hotels were sold out, long in advance of Buju Banton’s first live performance.

The venue for this historic night was the National Stadium at Independence Park in Kingston. As fans enter the grounds, a statue of Bob Marley greets them. With a maximum capacity of 35,000 fans, the anticipation for this particular concert is the closest recreation to the One Love Peace Concert in 1978.

Buju Banton’s return to the stage was a family affair, featuring some of the best talent Jamaica has to offer to the world of reggae. The openers and special guests consisted of Beres Hammond, Chronixx, Cocoa Tea, Etana, Gramps Morgan, Koffee and DJ Khaled, among others.

As anticipation grew for Buju’s first live set, the lights turned down low and cell phones lit up the night’s sky. As Buju walked on stage the spotlight followed, as he dropped to his knees and asked for mercy. “Oh, Lamb of God, have mercy on me,” Banton repeated. Then, in a flash, the Shiloh Band began the show with Banton leading the set with “Not An Easy Road”.

From that point, the party commenced. The capacity crowd was boisterous throughout Buju’s 90-minute set, which ran through the star’s extensive catalogue, performing hit songs, “Destiny”, “Driver A” and “Champion” among others.

The birthplace of reggae was host to the rebirth of Buju Banton, and the announcement was made loud and clear to the rest of the world: Buju is back!