Weeks after Slightly Stoopid and SOJA announced their summer tour, Rebelution made their summer plans public.

It is difficult to label one tour better than the next, the best option is to just appreciate great bands and good music joining together for the ultimate summer concert series across the country. In the past few years, the reggae genre in the United States has blossomed. One attributing factor could be the joining of forces amongst the elite bands in American reggae. 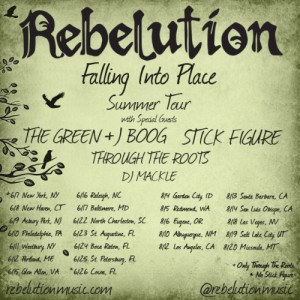 Arguably, the two most prominent band’s in the genre are teaming up together for the Return of the Red Eye Tour this coming summer. Now, Rebelution has announced their summer plans with the Falling Into Place Tour, which will feature The Green, J Boog, Stick Figure and Through The Roots as special guests and supporting acts.

Rebelution’s summer tour dates will commence on May 29th, as the band will be the headlining performer at the 7th annual California Roots Music and Arts Festival in Monterey, CA. Then, Rebelution, The Green, J Boog, Stick Figure and Through The Roots will perform at Red Rocks Amphitheatre in Morrison, Colorado on June 3rd.

There are multiple mega-tours set to rip through the United States this summer, and many, if not all, the shows will be filled to capacity with the lineups on display. Do not wait to purchase your tickets for these tour dates.