It seems like with each passing day and week, another prominent band announces a festival-like touring lineup.

On Monday, the full touring schedule and pre-sale tickets for Sublime with Rome has been announced. It was announced previously that Sublime with Rome was set to hit the road with touring mates Dirty Heads, Tribal Seeds and Bleeker. 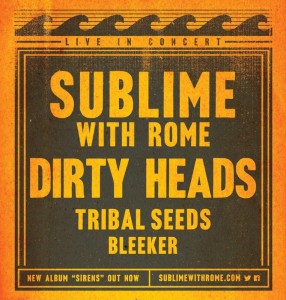 One select dates, the heavyweight lineup will also feature 311 and Matisyahu, as their summer touring schedule will intersect in both Austin and Dallas, Texas.

There has been a substantial amount of Sublime fans that do not support the Sublime with Rome project, since the departure of original Sublime drummer, Bud Gaugh.

However, with only one-third of the original act, Sublime with Rome continues to tour and sell new albums with a good amount of success. Many of their shows, both in the United States and internationally are routinely sold-out.

Much like the Wailers with only Aston “Family Man” Barrett on bass, the fans love the timeless music that the band performs at live shows. No one should criticize a band for keeping the music alive for the next generation of music lovers.