The most anticipated one-day reggae festival in Colorado has revealed its fully-loaded 2016 lineup for this summer.

Reggae on the Rocks at the acclaimed Red Rocks Amphitheatre in Morrison, Colorado has been considered one of the premier reggae festivals in the United States since its inception in 1988. Twenty-eight-years later, this year’s edition might be the best lineup to date. 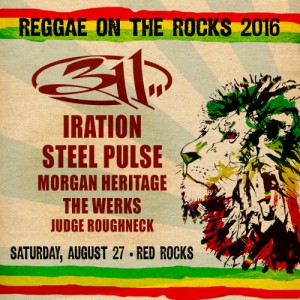 Coming full-cirlce, Steel Pulse will be one band on the bill that was featured on the very first Reggae on the Rocks in 1988, as well as the most recent edition.

The one-day Reggae on the Rocks festival will be held on August 27, 2016 on the outskirts of Denver in Morrison, CO.

Red Rocks Amphitheatre is one of the most renowned outdoor venues in the United States. The capacity is limited to 9,525 patrons, and with the elite reggae lineup slated for this year’s Reggae on the Rocks, it is clear that tickets will be purchased at a rapid rate.

Tickets go on sale Friday, April 1st and will available for purchase, starting at $55 or $60 on the day of the show.

For more information on Reggae on the Rocks, follow the links below.