One of the elite reggae bands from the United States has announced details for their latest studio release.

Rebelution, from Santa Barbara, California has rapidly emerged as one of the most prominent recording and touring acts within the reggae genre. As a veteran band, releasing Billboard Chart-topping albums since their debut album Courage to Grow (2007), the band’s sound has evolved, but the message remains the same. 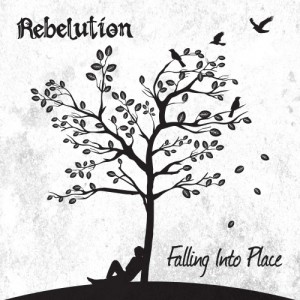 The California reggae band is currently on a streak of releasing a new album in each of the last three calendar years. In 2014, Rebelution released Count Me In, which debuted at #14 on the Billboard Top 200 and was named Billboard’s best-selling reggae album of the year. Then, as Rebelution is known to do, they released an unplugged album version of their 2014 album, Count Me In (Acoustic), officially released on September 18, 2015. Following suit, the 2015 album release from Rebelution topped the Billboard Reggae Chart.

Now, Rebelution made it official; the band will release their fifth studio album Falling Into Place on June 3, 2016 via Rebelution’s own 87 Music and in conjunction with Easy Star Records, an independent reggae label based out of New York.

In an interview with Billboard, lead singer Eric Rachmany explains, “We named the album Falling Into Place because all of our varied inspirations and experiences came together into one cohesive collection of music that we all really love.”

With this announcement, Rebelution also gave their loyal fan base an early taste as to what listeners can expect on the upcoming studio effort, releasing two-songs, “Know It All” and “Upper Hand”, respectively, from the 11-track Falling Into Place album.


On previous albums, Rebelution has collaborated with an A-list cast of esteemed vocalists, such as Don Carlos, Jacob Hemphill of SOJA, J Boog, Collie Buddz, Lutan Fyah, and many others. For the band’s Falling Into Place album, Rebelution has recorded the song “Inhale Exhale” with Jamaican singer, Protoje.

Coinciding with the album release on June 3rd, Rebelution will kickoff their Falling Into Place Tour with a performance at the picturesque Red Rocks Amphitheatre in Colorado. In total, there are 26-dates from June 3rd to August 20th, which will feature special guests and supporting acts The Green, J Boog, Stick Figure, Through The Roots and DJ Mackle.

For more details on Rebelution, follow the links below.