One of the flagship bands in American Reggae, has announced their east coast tour dates this spring.

Iration, the Hawaiian born, California formed reggae-rock band will be bringing their new album, Hotting Up, on tour this spring and summer. After a successful fall tour following the official release of Hotting Up on August 28th, 2015, Iration toured with Pepper, New Kingston, The Green, The Movement and Hours Eastly, as well as select dates with SOJA and J Boog in support of the release. 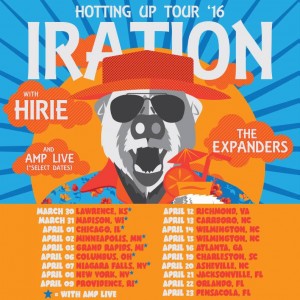 Other notable show dates for Iration will include festival performances at the Bottlerock Festival in Napa, alongside the Red Hot Chili Peppers, Ziggy Marley and Michael Franti, among others and back-to-back shows at the Orange County Fair with special guests Collie Buddz, Rebel SoulJahz, The Steppas, Seedless and Katastro.

On July 29th, Iration will be performing in Hawai’i for the first time since 2013. Iration will be headlining the annual MayJah RayJah Music Festival at the Waikiki Shell in Honolulu, with special guests J Boog, Matisyahu, Yellowman and many more.

Iration will be covering a lot of land throughout their travels over the next few months, so find a show near you to enjoy their music live and direct.

For more information on Iration, follow the links below.