The 2016 Grammy Award winners for Best Reggae Album, have announced their touring schedule for this summer.

Morgan Heritage is one particular band that has seen their fruits of their labor with sold out shows, Billboard Chart-topping albums, constant radio air play and, now, a coveted Grammy Award win. Hard work, determination and having faith in their process has all been worthwhile for Morgan Heritage. 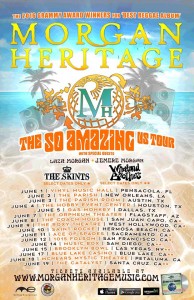 Their most recent studio release, Strictly Roots (2015) was their most successful album commercially. This past year, the band has been featured on tour dates with Damian Marley, Stephen Marley, Tarrus Riley, SOJA and Rebelution, as well as headlining their own concerts throughout Europe, the South Pacific, Africa and the United States.

“Reggae music is global and we wanted to continue to display the globalization of Reggae music by sharing our stage with young talented Reggae artist and artist influenced by Reggae artist. The Skints from the UK, Wheeland Brothers from Southern California, Laza Morgan and Jemere Morgan from Jamaica all gives us confidence that the future of the music is very bright,” said Morgan Heritage. The So Amazing U.S. Tour will include a total of 16-dates in 19-days.

Prior to the U.S. tour beginning, Morgan Heritage will be performing in Africa with performances in the Ivory Coast and Malawi, on April 8th and April 30th, respectively.

Perhaps Morgan Heritage’s biggest American show of the summer will be their appearance at Reggae on the Rocks in Colorado. The one-day festival lineup will include 311, Iration and Steel Pulse, among others.

Europe was not overlooked while laying out the summer plans for Morgan Heritage. The band will be featured on three festival dates in July, Summer Jam in Germany, One Love Festival in Italy, and Boomtown Festival in London.

The Grammy Award winners are certainly not resting on their laurels in 2016.