Hawaii’s premier island reggae music festival will be traveling to Las Vegas in 2016.

The MayJah RayJah Music Festival has long been a staple in the local Hawaiian music community, across the islands of Hawai’i. It has been billed as the “biggest festival in the Pacific”. 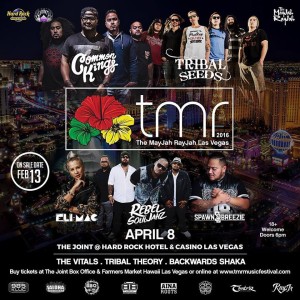 Recently, the festival has loaded up and featured traveling events outside of the islands of Hawai’i, with shows in California, Las Vegas, New Zealand and beyond. With the success of those one-off shows, The MayJah RayJah is returning to Las Vegas for their biggest festival on the mainland, yet.

On April 8, 2016, The MayJah RayJah will invade The Joint at the Hard Rock Hotel and Casino on the Las Vegas strip. The Joint is an indoor event center with a total capacity of 4,000 patrons, and with the lineup announcement, one can make a gentleman’s wager that the festival will sell-out.

The lineup consists of some of the top talent in the reggae music community, and some of the best up-and-coming acts from California and Hawai’i. Many of these bands have been featured on MayJah RayJah Festival lineups in the past, but never all together for one night and on one stage.

For more information on The MayJah RayJah 2016 Las Vegas, follow the links below.