One of the top vocalists hailing from New Zealand has announced a full schedule of tour dates in 2016.

Sammy Johnson, or Sammy J, calls Auckland, New Zealand home, but writes and records his music on the islands of Hawai’i. The island style recordings have been fruitful for Sammy J, as some of his most recent single releases, such as “Hey”, “Leaving Me”, “Give It All” and “Waiting” have all earned the Number 1 spot for most requested songs on multiple Hawaiian reggae stations. 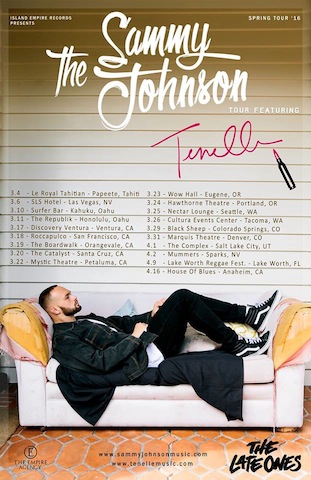 Sammy J has since spread his blend of R&B, Soul, Jazz and Reggae to the mainland United States as a special guest on tour with the Common Kings, FIJI, as well as headlining The Climax Tour with Pieter T, Tenelle and Finn Gruva.

The lengthy touring schedule for Sammy J begins in Tauranga, New Zealand at the One Love Festival on February 6th, followed by dates in Australia and Tahiti with supporting act Tenelle.

On March 6th, Sammy J and Tenelle will begin their United States tour, along with special guests The Late Ones from O’ahu. Cities included on the U.S. tour include, Las Vegas, Honolulu and Kahuku on the island of O’ahu, Ventura, San Francisco, Orangevale, Santa Cruz, Petaluma and Anaheim, California, Denver, Salt Lake City, Portland and Seattle, among others.

For east coast fans, Sammy J will be performing two festival dates in Florida, the Lake Worth Reggae Fest on April 9th and Reggae on the Block in Orlando on May 7th.

For more information on Sammy J and all upcoming tour dates, follow the links below.