New Zealand’s destination festival has a stacked 2017 lineup with international talent, including Tarrus Riley and The Green.

This past February in Tauranga, New Zealand, bands traveled from all corners of the globe to perform their distinct brand of reggae music at the One Love Festival. The United States, Bermuda, Hawaii, Europe, Jamaica and even some of the most prominent reggae acts locally in Aotearoa, like Katchafire, House of Shem, Sons of Zion, Sammy J, Kora, Tomorrow People, Three Houses Down, 1814, and many more were featured on the 2016 edition of the One Love Festival. 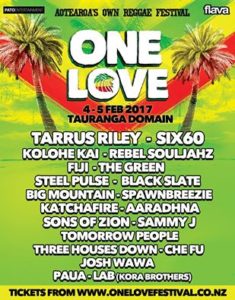 The international bands featured on the most recent One Love Festival included J Boog, Common Kings, Collie Buddz and Third World. It’s not everyday, a music fan can take in the sweet sounds of these flagship reggae bands, sharing different styles and sounds within the worldwide reggae genre. With the wide variety of reggae flavors featured at one festival, concertgoers’ palate will surely be satisfied.

The One Love Festival has grown into such an internationally renowned music destination for reggae fans across the globe. Ticket prices range from $99 for General Admission all the way up to $179 for VIP passes.

For more information regarding the One Love Festival in New Zealand, follow the links below.