The flagship California reggae band, Slightly Stoopid, will be returning to Hawai’i for the first time in five years.

The journey has been a long, steady climb for the 25-year veterans from San Diego, CA. Slightly Stoopid has reached the top of the mountain on the success of over a dozen album releases and passport stamps from five continents across the globe. 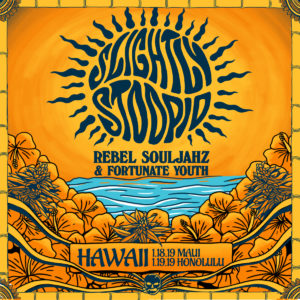 Lifelong friends and the band’s founding members, Miles Doughty and Kyle McDonald, have been living out their childhood dreams since the band’s start in 1994.

Slightly Stoopid even has their own destination music festival in Mexico dubbed Closer to the Sun, which just recently turned five-years-old.

But, no matter what the occasion is, Slightly Stoopid always throws a good, old fashioned party.
Fortunately for fans in Hawai’i, the islands will host Slightly Stoopid’s next live performances.

On their previous trip to the Aloha State, Slightly Stoopid sold out The Republik, which holds a maximum capacity of 1,000. The last tour featured Barrington Levy, Don Carlos and north shore native, Makua Rothman. What will Slightly Stoopid have in store this time around?

First stop on the island chain will be Maui on January 18th at Maui Arts and Cultural Center, followed by O’ahu on the 19th at Aloha Tower Marketplace. The Hawai’i Tour is being produced by Ray Jr. and The MayJah RayJah, featuring Slightly Stoopid sharing the stage with fellow Golden State natives, Fortunate Youth and Hawaii’s own, Rebel SoulJahz.

Tickets for both shows are currently available at TMR Events.