The Australian-turned-global conscious roots artist will embark on a summer tour throughout Europe.

Saritah, pronounced, (sa-REE-ta), is a Korean born, Australian raised artist-turned-global conscious roots singer-songwriter. Saritah has released three full-length albums and one EP in her career, which spans over 12 years. Most recently, Saritah released her latest single, “Inner Wealth” on May 6th. 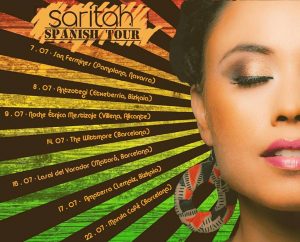 Discussing the latest single with The Island Sound, Saritah explains, “The song is really about the evolution of consciousness, that I’m experiencing, but also experiencing and seeing it in the world at large.”

One of Saritah’s most successful songs is a collaboration with Spain’s Green Valley Band, titled “Somos Iguales”. The 2013 music video has received over 4 million views on YouTube.

It is awfully fitting that the next tour dates for Saritah to announce would be a month-long tour throughout Spain. Beginning on July 7th in Pamplona, Saritah will perform in seven venues over three weeks, including stops in Barcelona (twice), Etxebarria, Mataro, Lemoiz, and Villena.

Currently, these are the only tour dates confirmed for Saritah. However, in an interview with The Island Sound, Saritah shared her plans to return to Australia for tour dates before the end of the year.

For more information on Saritah, follow the links below.