One of the biggest names in the New Zealand reggae music genre will be returning to the United States.

Over six years ago, childhood friends came together to form Sons of Zion. Hailing from New Zealand, they were unified as a band by their work ethic, open eared approach to music, and a strong collective focus on regional identity, family and community. 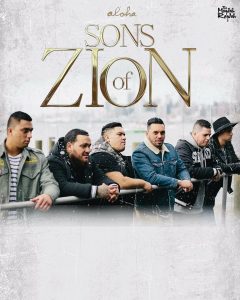 Since the band’s self-titled album released in 2009, Sons of Zion has amassed nearly 5 million views on YouTube for “Be My Lady”, “Tell Her”, “Superman” and “Stuck on Stupid”, alone. Sons of Zion has etched their name as the next in line of many talented bands and artists from New Zealand to test their sound on American soil.

With flagship bands like Fat Freddy’s Drop, Katchafire, The Black Seeds, House of Shem and others, flying to the United States for extensive international touring, the reggae circuit craves these fresh sounds from New Zealand. Most recently, solo artist Sammy Johnson or Sammy J has found a great deal of success in the United States, touring with Common Kings, Tenelle and Fiji.

About one-year ago, Sons of Zion found their breakthrough in the United States with a festival appearance at Hawaii’s MayJah RayJah Music Festival on O’ahu and Maui. Now, with multiple new singles earning radio airplay in Hawai’i, Sons of Zion will make their return trip to the MayJah RayJah Music Festival at the Waikiki Shell, the Maui Arts and Culture Center, as well as club dates in Ewa Beach and Kahuku on the island of O’ahu. The Hawai’i tour dates run from July 22nd to July 30th.

Prior to leaving New Zealand, Sons of Zion will perform a benefit fundraising concert for the homeless community in New Zealand. Music is Love: Hope for the Homeless will take place on July 14th in Auckland, featuring performances by Three Houses Down, Tomorrow People, Pieter T, Che Fu, Swiss and DJ Hemz. All proceeds from the show will go towards helping the homeless population throughout New Zealand.

Upon returning from the United States, Sons of Zion will perform a string of concerts throughout New Zealand, featuring performances in Rotorua, Auckland, Hamilton, Whangarei, New Plymouth, among others. The tour will run from August 5th to September 23rd.

For more information on Sons of Zion, follow the links below.