The Island Sound presents the full-length interview with Saritah, and the video premiere of “Inner Wealth”.

Saritah, pronounced, (sa-REE-ta), is a Korean born, Australian raised artist-turned-global conscious roots singer-songwriter. Saritah has released three full-length albums and one EP in her career, which spans over 12 years. 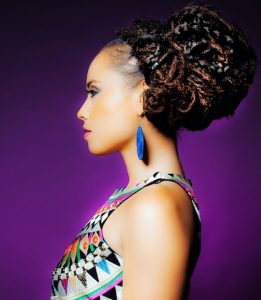 Anticipating her latest single, “Inner Wealth” and accompanying music video, The Island Sound had the pleasure of speaking with Saritah. The topics include her new music, world travels, collaborations, working with producer Mario C (Beastie Boys, Manu Chao, Jack Johnson, John Butler Trio), how female musicians and artists in the reggae genre are presented and portrayed, as well as her new project, Del Corazon.

In celebration of Saritah’s new single and music video for “Inner Wealth”, the aforementioned topics and much more are available for your viewing pleasure below.

Without further ado, here is the exclusive interview with Saritah…

The Island Sound: To start out, you were born in Korea and grew up in Australia. So, what influences led you to start a career in music?
Saritah: I had piano lessons for about ten years, going back to about six-years-old. I was very blessed as a child that my parents encouraged that. I got a guitar when I was 15, and started writing songs on it. But, it wasn’t until I started traveling around Australia and going to music festivals that I really felt the power that music has in a live format. Music brings that feeling of absolute unity, inspiration, upliftment and energy. There was definitely one turning point; I remember seeing an artist, Rokia Traore, she is out of Mali in West Africa. I saw her show and I was actually in tears. She just moved me deeply, that I had to do this. I have to make this my life.

The Island Sound: You have performed all throughout Asia, Europe and at many international festivals. What were those experiences like performing your lyrics in English for a crowd that might not speak the language fluently?
Saritah: Music really is the universal language. Even though people might not understand all the lyrics, a lot of people will pick up a few words here and there. It really is about the energy. Music translates and people feel that energy in their souls, especially during a live show.

The Island Sound: On the topic of sharing different languages in music, how did the collaboration on “Somos Iguales” arise with Spanish band, Green Valley?
Saritah: That was through the power of social media. I was in Barcelona, doing some shows in Europe. A sister whose partner was in the band, sent me some of their music and I liked the way it sounded. And, they sent me a track and I wrote to it and sent it back. The next day I was at their studio recording it. 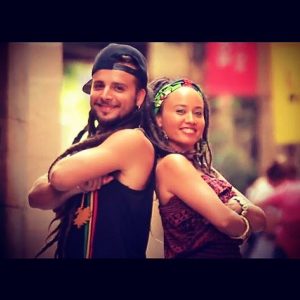 Then, the next day we were out in the streets of Barcelona, making a video. Literally, it happened really fast. I had no idea something that happened so organically would have such a far reach. It is a blessing. It’s interesting, because, I have a new collaboration that I am working on with Cempoalli, a Los Angeles native artist. Del Corazon is the name of the new project. We are singing half in Spanish and half in English. I have always wanted to write more in Spanish. Because of that collaboration with Green Valley, it trips me out that a lot of my fans are from Mexico, Colombia, Chile and Spain. Through the power of the internet, it really is a small world now.

The Island Sound: Reggae truly is an international sound. Along those lines, you shot a video for the song, “These Days” in Mozambique. Describe that journey and your personal experience there.
Saritah: I was really captivated and fascinated by Africa. I knew Africa has had such significance in history and life on earth. Of course in music, pretty much every type of music originated in Africa. Of course, reggae came out of Jamaica, but Jamaica came out of Africa. So, I was blessed to have a round the world ticket, and I was flying to Africa from London. But, with a round the world ticket, you can only go in one direction. So, I flew to South Africa and took an eight-hour bus ride from Johannesburg to Maputo, Mozambique. Once I arrived in Maputo, everyone I met was creative; either a musician, a dancer or a photographer. I met a brother, who lived on the outskirts of Maputo in a township, and that experience really did change my life. They all had the biggest smiles I have ever seen, and yet, the people there also had less than I have ever seen. It was a true roots experience. And, at the end of my experience there and my journey, I knew I had to document this. So, I found, really, the only person that had access to a camera and a Macbook to make the video.

The Island Sound: It seems like many male artists or bands in the reggae genre, specifically, are collaborating with female vocalists. Are there any particular artists or bands that you would like to collaborate with in the future?
Saritah: I was actually booked to open for Steel Pulse on a couple of their California tour dates. Unfortunately, David Hinds had pneumonia and they had to cancel. Definitely Steel Pulse, I would love that. I got a chance to meet those guys while touring in France, and they have a really powerful live show. There are so many artists I would love to collaborate with. Not just in the reggae genre, but some of my favorite artists are Manu Chao, Erykah Badu, Midnite, Jah9 and Kabaka Pyramid.

The Island Sound: As a female artist in the reggae touring circuit, what is your take on how female singers in the genre are portrayed or perhaps even portray their image while on stage? 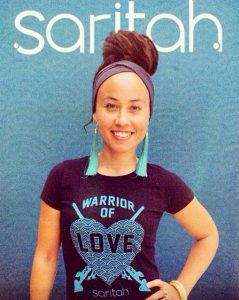 Saritah: It’s interesting, still to this day you see the lineups of every festival are 85, 90 to 100 percent male dominated artists and bands. Let’s be honest, I think women are nicer to look at, you know? There is a fine line between being beautiful while playing music and portraying beauty before the music. You still see those flyers with boobs and girls. Personally, I don’t like seeing flyers like that. That’s not going to make me want to go to the show. I want to go to the show because I like the music. I’m a woman, so I can’t speak for the guys, but I think it would be nice to see flyers for shows that didn’t have artwork that were objectifying a woman’s body. There are some artists, that no matter what a woman wears, their music will outshine the image. I do believe, each woman has the freedom and choice to present herself how she wants to be presented.

The Island Sound: Focusing on your music, you have recorded in Australia, London and your most recent album release, Dig Deep, in California. What led you to decide on those locations for recording sessions?
Saritah: It’s where I am at in my life at that particular time and where the energy is pointing. For Dig Deep, I had started working with a manager in California and got a band together for touring, performing at festivals, and it just seemed like a natural evolution out in California with that group of people. Also for that album, we did some work with Mario Caldato Jr., who at the time was based out of L.A. He has done some incredible work with Beastie Boys, Manu Chao, John Butler Trio and Jack Johnson. It was great to work with him and he did great work on the album, which I’m truly grateful for the opportunity to work with him.

The Island Sound: You’re releasing a new single, “Inner Wealth”. How was the writing process and what was the inspiration for the song?
Saritah: That song is a collaboration with Million 7 (Seth Theodore), who is based out of Santa Cruz, California. He has been a long time collaborator now. The instrumental part of the song is the Fyah Bless Riddim. When I heard it, I just loved it. The chorus started to come through, which is my absolute favorite. When you have the words and melody and rhythm coming through just right, that is when you know you really have something special. The chorus for “Inner Wealth” was one of those tunes. The song is really about the evolution of consciousness, that I’m experiencing, but also experiencing and seeing it in the world at large. Of course, we are not always going to be the best version of our self, but every moment is a new opportunity to be that and remember who we really are. The line that says, (singing) “Every word you say has a vibration and every thought you have goes out towards the sun” is really meant to check yourself, check your thoughts, your words, because the life that you see around you really is going to be the reflection of our thoughts and words.

The Island Sound: For the accompanying music video, it was very well put together and a clean visual to a great song. Your videos truly capture the natural surroundings. How was the filming for the new video? 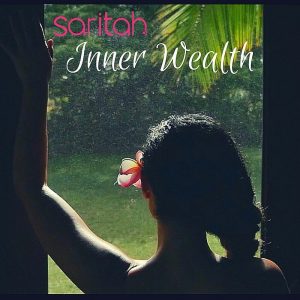 Saritah: It was really peaceful. I was out in Hawai’i. It was shot on the Puna Coast of the Big Island. The video was made by Grototote, and I met him through Nahko (Nahko and Medicine for the People), while they were touring in Australia a couple of years back. When I knew I was going out to Hawai’i, and I had this song bubbling on the stove, I linked up with him. It was one day of filming. I did my own makeup for the shoot. We did it in a super roots style. There are a lot of slow motion shots of nature, flowers, coastlines, surf, capturing the vibe of the song, being present to the moment. The video shows the outer wealth of nature reflecting the inner wealth of one’s self.

The Island Sound: Now, for upcoming live shows, you will be performing at a festival in Spain this summer. Are there any tour dates scheduled beyond that?
Saritah: Yes. There will be more European tour dates added soon for July. I’m actually about to take Del Corazon on the road throughout May in California. We will also be playing a show out in Connecticut. I’ll have the Saritah shows in July and going back to Australia towards the end of the year. So, I’m going to be pretty busy for the rest of this year. I’m just doing my best to honor the music, however it wants to come through.

The Island Sound: On the topic of music festivals, you performed at some of the United States’ largest reggae festivals, the Sierra Nevada World Music Festival and California Roots. How were those experiences, traveling from Australia to California to perform?
Saritah:When I first came out here, I was kind of guided through the process. I think at that time, I only knew one person in California. I ended up at Sierra Nevada with backstage passes, and I eventually met my current manager there, and met some of my friends that are now the closest to me in my life. When I was at Sierra Nevada as a fan, I just stopped and thought to myself, “Wow, I would Love to perform at this festival.” California has been great to me. I think California has the right demographic from a musical perspective. People love reggae and are open-minded. So performing at Sierra Nevada, Cali Roots and Joshua Tree Music Festival, it was just a good match for my music, and it still is to this day.

For further details and the official music video for “Inner Wealth” by Saritah, follow the links below.