For some American and international bands and artists, the journey to Monterey, California has already commenced.

The California Roots Music and Arts Festival has rapidly emerged as a destination festival for the reggae genre with fans and bands alike. Going on seven years, the festival has grown exponentially both in attendees and the talent performing on stage. 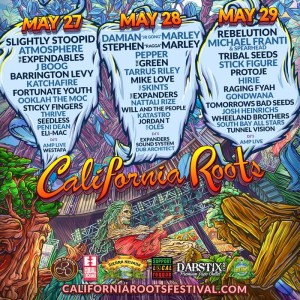 What began as the ultimate backyard party for the California Roots clothing line, started by owner Jeff Monser, has now blossomed into the premier reggae festival in the United States.

At the beginning, the first annual Cali Roots Festival drew 1,400 people for their one-day event, and every year until 2013, the event has doubled its attendance figures.

In 2014, organizers added an outdoor arena at the Fairgrounds (known as the Bowl) to the original stages, upping the event’s capacity to 11,000 people per day.

Not only did the additional bowl stage increase the festival’s capacity, but it increased the level of prestige applied to Cali Roots. The Bowl is the same stage that Jimi Hendrix infamously lit his guitar on fire, while performing at the Monterey Pop Festival in 1967.

In the early stages of the festival (2010-2011), before additional stages were implemented to the Monterey County Fairgrounds, Ooklah the Moc, from Hawai’i, was the only band featured at the festival not based among the continental 48-states. Now, the festival features nearly a 50-50 split among performing artists from abroad and stateside.

two bands from London (The Skints and Will and the People), two bands from Australia (Nattili Rize and Sticky Fingers), one from New Zealand (Katchafire), and one from Chile (Gondwana).

California Roots often utilizes the social media hashtag of #itsamovement and it truly is. Artists, bands, booking agents and management teams will coordinate their entire summer touring schedule around the road to Cali Roots.

Some will travel up the coast from Los Angeles or San Diego, others will travel west from the east coast and midwest, while others will fly over ten hours just to perform for one hour at the 7th annual California Roots Music and Arts Festival. And, that is just the bands. Imagine the concertgoers collective travel itinerary.

With nearly 40-bands spread out over three stages and three days, fans can literally get a taste for the musical pallet from all corners of the globe.

Tickets for the 7th annual California Roots Music and Arts Festival are still available for purchase. Single day tickets are $85 and three day passes are $190.

This year’s California Roots Festival will take place from May 27-29, 2016, at the Monterey County Fairgrounds.