After 35-years since the unfortunate death of Bob Marley, the reggae legend’s music still lives on with The Wailers.

Aston “Family Man” Barrett, is the last original member of The Wailers, dating back to 1969 as he churns out those funky bass lines behind Marley’s soulful lyrics. 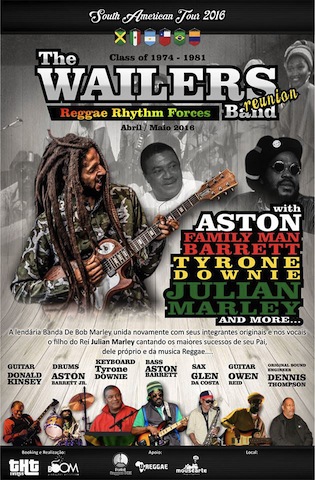 Reggae music has never stopped evolving since Bob Marley’s passing in 1981. In fact, reggae has flourished since the 1980s. For millions of people around the world, it’s still defined by the songs of Bob Marley and The Wailers. It’s been the band’s heartbeat rhythms that have inspired so much of what has followed since, as evidenced by the enduring popularity of the one-drop reggae sound.

For reggae fans around the world trying to relive the iconic Bob Marley and the Wailers live show, the authenticity Aston Barrett brings to the current Wailers’ sound is indisputable, while today’s line-up combines old school know-how with lead vocals from some of Jamaica’s most exciting new singers.

The current line-up consists of Aston Barrett on bass, his son, Aston Barrett Jr. on drums, Donald Kinsey on guitar, Tyrone Downie on keyboard, Owen Reid on guitar, Glen Da Costa on saxophone and Dennis Thompson running the sound. Most notably, for the band’s shows in South America, Julian Marley will be singing his father’s lyrics. One thing is for sure, the Wailers have remained a traveling family band.

The Wailers will be touring through South America for the entire month of May, kicking off in Argentina on May 5th and 6th before performing in Brazil, including shows in Rio De Janeiro, Porto Alegre, Sao Paulo, Salvador and Recife, among other cities.

Also joining the South American tour will be the internationally renowned reggae band, SOJA, from Arlington, Virginia in the United States. SOJA will perform alongside Julian Marley and The Wailers on May 18th, 20th and 21st in Brazil.

Reggae music is often imitated and many attempts to replicate the true sound, but nothing comes close to The Wailers.

For more information and details regarding The Wailers and their world tour, follow the links below.