The pride of Guam will start their trek to the United States for the summer touring and festival circuit.

For Peace Band, from Guam, have been performing live since 2011, but have recently made the mainland United States an annual touring destination. Last spring, For Peace Band ventured through uncharted waters to California, performing select dates in San Diego, Orange County, Los Angeles County and northern California. 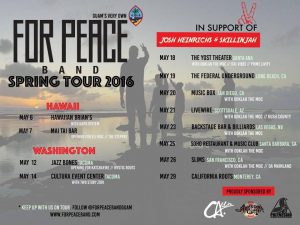 Throughout the band’s brief life on the road, For Peace Band has shared the stage with highly acclaimed artists like Kingston, Jamaica’s Shaggy, Magic! from Canada, Katchafire, House of Shem and Sons of Zion, all hailing from New Zealand, Ooklah The Moc, The Green, Ekolu, The Steppas, and Peni Dean (the voice of Natural Vibrations), all from Hawai’i, as well as American based touring acts, Tribal Seeds, The Expanders, Josh Heinrichs and SkillinJah, among others.

For Peace Band, actually performed as Josh Heinrichs and SkillinJah’s backing band at the 2015 Trench Fest in Guam. Now, as all three acts will be touring on the West Coast of the United States at the same time, For Peace Band will be utilized as Josh Heinrichs and SkillinJah’s backing band for eight tour dates in California, including the final performance of the tour at the 7th annual California Roots Music and Arts Festival in Monterey, CA.

Prior to linking up with Josh Heinrichs and SkillinJah on May 18th in California, For Peace Band will be performing in Hawai’i on May 6th and 7th, alongside The Steppas, Eli Mac and Kapu System in Honolulu. On May 12th, For Peace Band will open up for Katchafire and Mystic Roots in Tacoma, Washington at Jazzbones.

For Peace Band has been touring in support of their debut album Forwards Ever (2014), which peaked inside the Top 10 Reggae Albums on iTunes in its first week.

For more information of For Peace Band and their upcoming U.S. tour dates, follow the links below.