It’s rare for a festival to last more than three days. At Rototom Sunsplash get ready for eight days.

One of the biggest reggae festivals in the world, Rototom Sunsplash, will take place in Valencia, Spain from August 13-20, 2016. For the last 23-years, this particular European music festival has set itself among the elite music festivals, of any genre, in the entire world. 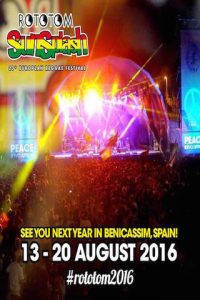 The festival garners its name from Jamaica’s original Sunsplash festival in Kingston. Honoring the oval rock in the Caribbean, Rototom Sunsplash always includes an A-list cast of artists and bands that call Jamaica home. The 2016 festival lineup announcement proves to be following suit of past editions.

The eight-day festival includes live music, camping, workshops, conferences, children’s games, dance contests, gastronomy, crafts and a whole host of other activities that will ensure fans will get the most out of their Rototom Sunsplash experience.

Tickets for the festival range from single day passes for $69, all the way to eight-day passes, including camping, for $207

For more information on Rototom Sunsplash 2016, follow the links below.