One of the fastest rising island reggae outfits from Hawai’i will host their official album release party.

Formed on the windward side of O’ahu in 2013, The Vitals have taken the Hawaiian reggae radio stations by storm since their first hit single, “Fake Lover”. Mixing together a wide ranging musical palette with a heavy focus on roots and island reggae with soul, funk and R&B, the eight-piece band’s sound has caught the ear of the Hawaiian music community and international touring outfits, alike. 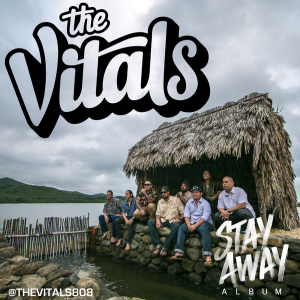 With persistent radio success over the band’s tenure with singles, “Hey Mr. DJ”, “She Got the Roots”, “Shine”, “Here We Go”, “Your Smile”, and the aforementioned debut single, “Fake Lover”, The Vitals have landed supporting act slots alongside some of the most prominent reggae acts today.

Over the past calendar year, The Vitals shared the stage with UB40, Katchafire, Tribal Seeds, House of Shem, Kapena, Common Kings, Rebel SoulJahz, Ooklah The Moc, Eli-Mac, and Guam’s For Peace Band. Recently, The Vitals were also featured performers at the NFL Pro Bowl Block Party in Waikiki on Queen’s Beach.

With all the band’s success at live shows and with radio singles, it was only a matter of time before The Vitals released their first full-length album, Stay Away. The album was recorded at Bu Print Studios in Kaneohe, O’ahu with production by Kapena DeLima, son of famed Hawaiian singer, Kelly Boy DeLima.

Now, The Vitals will be headlining their own showcase for their Stay Away official album release party on February 19th. The event will take place at Hawaiian Brian’s in Honolulu, and will feature performances by special guests Rootikal Riddim, Kapu System, Kapena Mokiao and DJ Hapa Boy. Tickets are available for $20 or if fans wait until the last minute, $30 on the day of the show.

For those reggae fans residing on the Mainland United States, The Vitals will be performing at the MayJah RayJah Las Vegas Festival on April 9th, 2016, alongside the Common Kings, Tribal Seeds, Rebel SoulJahz and more.

For more information on The Vitals, follow the links below.