One band attributed to bringing mainstream popularity to the reggae-fusion style in the United States is back on tour. 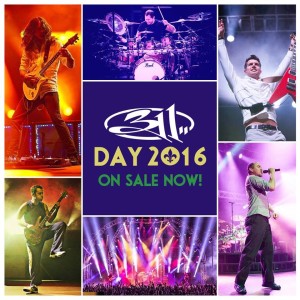 All these years later, and 311 is still releasing new studio albums and touring on their annual summer 311: Unity Tour throughout the United States. More recently, 311 has started their own Caribbean cruise, leaving from Florida and anchoring at Great Stirrup Cay in the Bahamas, as well as their 311 Day on March 11th.

This year, 311 Day will take place in New Orleans, Louisiana over two nights, the 11th and 12th of March at Smoothie King Arena (formerly New Orleans Arena). Tickets are available in two-day passes only, no single-day tickets ranging in price from $94.50-$135.

Traditionally, this multi-day event sells out and includes 311 playing multiple sets, and performing over 60-songs live from their extensive catalog.

Prior to performing at their own 311 Day, the band will perform in Indio, California at the Rhythm, Wine and Brews Experience, alongside Matisyahu. Other tour dates this spring, include dates in San Diego, Phoenix, Myrtle Beach and Orlando.