Hailing from Los Angeles, California, The Expanders have announced a run of Spring Tour Dates in the U.S. 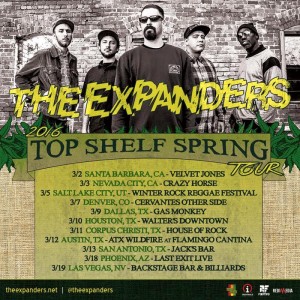 Some of the bands The Expanders have shared the stage with include Morgan Heritage, Marlon Asher, Slightly Stoopid, Iration, Tribal Seeds, The Green and Fortunate Youth.

Now, The Expanders have announced their 2016 Top Shelf Spring Tour as headliners, as well as supporting acts on Iration’s Hotting Up Tour.

The spring tour will kickoff on March 2nd in Santa Barbara before hitting cities in Las Vegas, Phoenix, Denver, Salt Lake City, Dallas, Houston and Austin, among others.

Then, over Memorial Day weekend, The Expanders will be featured at the 7th annual California Roots Music and Arts Festival, alongside Damian “Jr. Gong” Marley, Stephen “Ragga” Marley, Pepper, The Green, Tarrus Riley, The Skints, Nattali Rize, and Katastro, among others.

For more information on The Expanders and their upcoming tour dates, follow the links below.