Thunder Vibes Festival is back for year two, and the lineup has grown exponentially in the festival’s second year.

Thunder Valley Casino Resort in Lincoln, California is the site for the 2nd annual Thunder Vibes Festival. The location is about 25 miles northeast of California’s state capital, Sacramento. The annual festival is set to take place on Saturday, August 20, 2016. 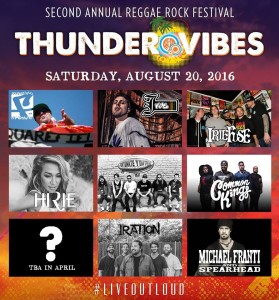 In the first year of the festival, Thunder Vibes had performances by SOJA, The Green, Anuhea and more. For the second annual Thunder Vibes Festival, promoters have called upon headliners Michael Franti and Spearhead, Iration, Common Kings, Fortunate Youth, Hirie and more supporting artists.

This year’s lineup includes an international headliner, as well as three American based reggae-rock headlining acts, and one of the fastest growing female reggae singers, Hirie as headlining and special guest performers for the second annual festival.

If the lineup wasn’t substantial enough, one more headlining artist will be revealed in April, four months before the one-day festival begins.

Tickets are currently available for pre-sale purchase at $39.75 for General Admission and $149.75 for VIP passes. General Admission for day of show purchases will be $89.75. If you are also looking to stay in the Thunder Valley Casino Resort, hotel rates are $500 per night.

For more information on the second annual Thunder Vibes Festival, follow the links below.

Video: Michael Franti and Spearhead – “The Sound of Sunshine”