The female singer-songwriter from Maui, Hawai’i has announced new Spring tour dates in support of her upcoming album.

One of the leading female reggae artists, Anuhea, has been extremely busy this past year. With a fully-loaded touring schedule over the past calendar year and relentless studio work on, not one, but two albums, All Is Bright (2015) and Shoulders (2016), it was only a matter of time before another slate tour dates were to be announced. 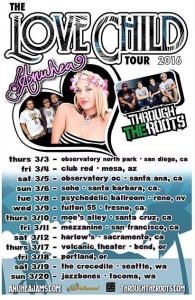 Anuhea’s latest album, Shoulders, to be released on February 5, 2016, will be followed by a tour throughout the United States, beginning in March.

The tour will dubbed, The Love Child Tour and will feature fellow Hawaiian reggae-rock band, Through The Roots.

The Love Child Tour will begin on March 3rd in San Diego, California and will include tour dates through Arizona, Nevada, Oregon, Washington and California dates in Santa Ana, Santa Cruz, Fresno, San Francisco and the Golden State’s capital, Sacramento.

Currently, the tour will last from March 3-20, but there are more dates to be added soon, extending into April.

But, before The Love Child Tour begins, Anuhea will be performing live in Las Vegas with Iration at the Brooklyn Bowl on January 31st, as well as headlining the Aloha Always Concert Series on February 13th on the Big Island of Hawai’i, featuring performances by Kimie, Justin Young and Paula Fuga.

For more information on Anuhea, the new album release, Shoulders and all upcoming tour dates, follow the links below.