No matter what the Common Kings do, at each turn, the band continues build on their success with each album release and tour. When your band has the opportunity to open up for Justin Timberlake, as a band and management team, they’re doing something right.

And, Common Kings seems to do no wrong. Blending pop hits with rock, reggae, R&B and classic soul influences, the crowd at their shows is always full throttle from the opening note to the last “hana 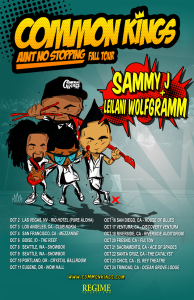 After spending time on the road with SOJA and Rebelution, as well as fellow Hawaiian based reggae acts, J Boog, The Green and Rebel Souljahz, it is time for Common Kings to grab hold of that headlining spot for their upcoming fall tour.

With only 16 dates on this tour, fans will have to be diligent and timely with their ticket purchases. Common Kings shows are more than familiar with sold out crowds and overcapacity venues. And, the special guest and supporting acts are well versed in performing to sold out crowds both in the United States and internationally.

For this particular tour, Sammy J from New Zealand and Leilani Wolfgramm from Florida will be joining the Common Kings throughout the tour. All three of the performers have had hit singles internationally, including New Zealand, Australia, Hawaii and in California.

If a United States tour wasn’t enough for you, Common Kings are also prepared to release their latest EP, Hits & Mrs, to be released on October 16th, 2015.

Follow the links below for more details on Common Kings and the Ain’t No Stopping Tour.