One of the leading singers in the reggae genre has announced his plans to tour throughout the United States.

Born and raised in Compton, California, J Boog now calls Honolulu, Hawai’i home. But, J Boog and his backing band, Hot Rain, will be heading back to the mainland to begin a relentless run of tour dates in 2019. 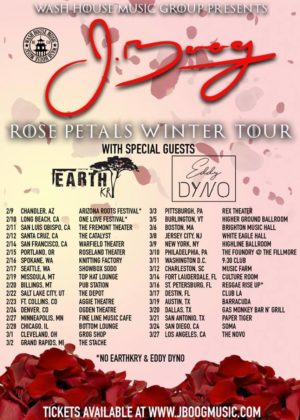 J Boog will begin his touring schedule in style at the Arizona Roots Festival on February 9th, followed by the One Love Cali Reggae Fest in Long Beach on February 10th.

After the early festival dates, J Boog will be touring the country with EarthKry from Jamaica and Eddy Dyno from California.

In total, J Boog will be performing 33 shows in 50-days, a schedule that displays the endurance and determination of these artists to spread their sweet sounds of reggae to the masses.

For more information on J Boog, the upcoming album release details and a full list of tour dates, follow the links below.