Southern California locals will be packing their cold weather gear for their upcoming winter tour with Nattali Rize.

With each passing year, it seems like the Common Kings continue to build off of their previous successes, climbing the ladder towards the top rung of the reggae genre. 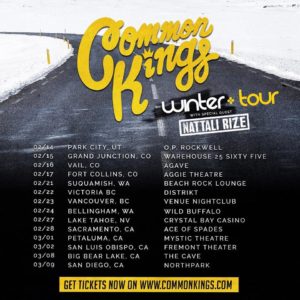 After an incredible 2018 calendar year, which saw the band release their latest album, One Day, the band did not stop there.

Common Kings also performed alongside Bruno Mars at Honolulu’s Aloha Stadium, collaborate with Stephen Marley and Matisyahu, perform at multiple international reggae festivals including California Roots and One Love, as well as headlining their own nationwide tour, the band shows no signs of slowing down.

The Common Kings have recently announced their plans for a fully-loaded touring schedule in 2019.

To kickoff the 2019 calendar year, Common Kings will be a featured performer at the One Love Music Festival in Long Beach, CA in February, with headlining performances by Slightly Stoopid Rebelution and Sublime with Rome, among many more.

Common Kings will begin their snowbound trek throughout the west coast, featuring shows in California, Nevada, Colorado, Utah, Washington and British Columbia. For their winter tour, the Common Kings will be bringing along direct support supplied by Nattali Rize, the solo artist who was previously the lead singer of Blue King Brown from Australia.

The winter tour will kickoff on Valentine’s Day in Park City, Utah and will conclude in San Diego, California on March 9th.

This calendar year will also feature a number of one-day festival showcases in Arizona for Days on the Green on April 19th and performing the following day as special guests for Slightly Stoopid’s 420 in Las Vegas, as well as sharing the stage with Dirty Heads in Florida on May 11th.

Common Kings are following their song lyrics as the travel through this musical journey: “Ain’t No Stopping”.

For more information on Common Kings, their music and all upcoming tour dates, follow the links below.