As the most prominent reggae festival in the United States, California Roots is back for year number eight.

Back and better than ever, the 8th annual edition of the California Roots Music and Arts Festival is shaping up to be the best festival to date for the Monterey Fairgrounds attendees. 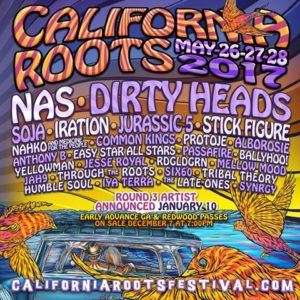 With the early artist announcements for the Memorial Day weekend festival coming nearly six months before fairground gates open for business, reggae enthusiasts are already asking, “Is it May, yet?”

For the first time in the festival’s history, Jurassic 5 and Hip Hop artist, Nas will grace the stage in northern California, joining fellow headliners Dirty Heads, SOJA and Iration. Other notable acts performing at the 8th annual California Roots Festival in 2017 are Alborosie, Stick Figure, Common Kings, Nahko and Medicine for the People, Protoje, Anthony B, Jesse Royal, Easy Star All Stars, Yellowman, Jah9. and many more.

The California Roots Festival’s 1st edition nearly eight years ago began with mostly local California-based reggae bands, along with one Hawaiian-based roots-reggae band, Ooklah the Moc. Now, the festival features plenty of international talent with some of the top artists and bands hailing from Jamaica and New Zealand flying to California to perform.

The festival has truly become a must perform event for the most elite performers in the reggae genre. Throughout the festival’s duration, the days have increased from one to three, and sun up to sun down with all-day performances, as well as increased attendance figures to over 25,000 patrons for the three-day event in Monterey, CA.

Tickets are currently on sale for the three-day festival with one final artist announcement set for January 10, 2017. Prices for a 3-day General Admission pass are available for $220. VIP Passes are also available for $485.

The 8th annual California Roots Music and Arts Festival will take place on May 26-28, 2016 at the Monterey County Fairgrounds.