The MayJah RayJah has revealed the first round of artists set to perform at the 2017 festival.

The MayJah RayJah Music Festival is back for the 2017 edition. Over the last seven years, the Mayjah Rayjah Music Festival has become a must see event for locals and visitors to Hawai’i who identify themselves as reggae connoisseurs and music lovers alike. This year’s festival features some of the premier talent in the roots-rock-reggae genre, past, present and future. 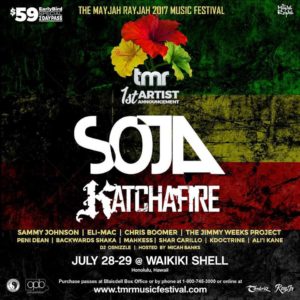 It is safe to say, The Mayjah Rayjah Music Festival has become the biggest music festival on the islands of Hawai’i each summer. And, with the announcement of the first round of artists and bands for the 2017 edition, that sentiment will, once again, ring true.

Headlining this year’s MayJah RayJah will be SOJA and Katchafire. Also featured on the deep lineup will be Sammy Johnson, Peni Dean the voice of Natural Vibrations, Chris Boomer, Eli-Mac, The Jimmy Weeks Project, Backwards Shaka, Shar Carillo, Mahkess and many more.

This year’s MayJah RayJah will take place at the world renowned Waikiki Shell on the island of O’ahu over two dates, July 28th and 29th.

For more information on this year’s MayJah RayJah, follow the links below.