Two of the biggest reggae acts from the United States and Jamaica will join forces to tour in 2017.

One of the hardest working and constantly touring bands in American reggae culture is Tribal Seeds. The success that this band has reached can be attributed to their relentless schedule on the road, connecting with fans at live shows and churning out multiple Billboard and iTunes reggae chart-topping albums. 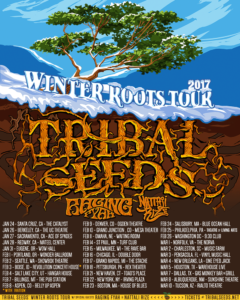 Most recently, Tribal Seeds released the full-length album,Representing in the summer of 2014. Perhaps the most interesting aspect of Tribal Seeds’ progression has been the fact that the band has grown and reached the heights it has as a completely independent touring outfit.

There are no big record label executives or behind the scene suits funneling money to fund the operation. Tribal Seeds is your quintessential grassroots band.

And, it all started in two brothers’ garage in Southern California. Now, Tribal Seeds is set to embark on yet another nationwide, headlining tour to begin the 2017 calendar year.

Tribal Seeds will join forces with one of the best from the new generation of Jamaican roots, rock, reggae acts, Raging Fyah. The five-piece reggae outfit includes Kumar Bent on lead vocals, Courtland White on guitar, Anthony Watson on drums, Demar Gayle on keyboards, and Delroy “Pele” Hamilton on bass.

On May 27, 2016, Raging Fyah released their third studio album, Everlasting via VP Records and the label’s subsidiary, Dub Rockers.

Over the past year, Raging Fyah has reached new heights, including performing in the United States for the very first time, as the band supported California reggae-dub band, Stick Figure on its Set In Stone spring tour, performing at the 7th annual California Roots Music and Arts Festival, joining Damian “Jr Gong” and Stephen “Ragga” Marley, Barrington Levy, Tarrus Riley, Don Carlos, and Marlon Asher as the flag bearers from Jamaica, and most recently touring extensively throughout Europe with Stick Figure, again.

For more information on Tribal Seeds and Raging Fyah, follow the links below.