O’ahu’s own, The Green, will headline the 2nd annual 2016 Greenroom Festival at the historic Waikiki Shell.

The Green is, perhaps, Hawaii’s most distinguished local reggae band to make it deep into the mainstream pop culture, potentially sharing that top billing with J Boog, whom shares part time residence in the 808 states. However, when The Green releases a new album or announces a new, headlining act throughout Hawai’i, tickets are sure to be flying out of the box office. 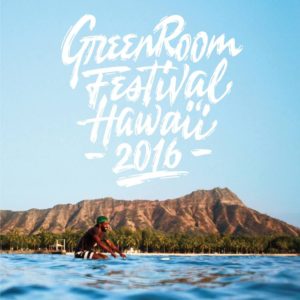 Although, it has been three-years since The Green has released a new full-length studio album, (Hawai’i ’13 on August 20, 2013), the O’ahu natives have released numerous singles and tribute tracks over that timespan. On top of that fact, The Green has remained a mainstay on the national touring circuit, performing alongside Rebelution, Iration, J Boog, Stick Figure, Pepper, and many more.

This past summer, The Green has ventured off on nationwide tour in support of Rebelution’s Falling Into Place album and coinciding tour. Most of those concert dates have features sold out performances to the reception of crowds upwards of 5,000 fans at each venue, and in some cases, exceeding 10,000 ticket holders.

Now, The Green will return to their own rock in the pacific ocean to perform for their own fans at the legendary Waikiki Shell, the same stage Bob Marley performed at in 1979.

The Green has performed numerous times at the Waikiki Shell in Honolulu, but according to our records, this will be their first ever headlining show at the historic venue.

This year’s Greenroom festival will feature The Green, Big Mountain, Ketsumeishi from Japan, Def Tech and many more.

Tickets are available, starting at $30 for General Admission buyers.