The mecca of American reggae will host the Shoreline Jam at Queen Mary Park in Long Beach, California.

The city of Long Beach is held dear to most reggae fans in the United States. Many folks attribute the Long Beach, CA based band, Sublime as popularizing the reggae-fusion movement in the 20th and now the 21st century. 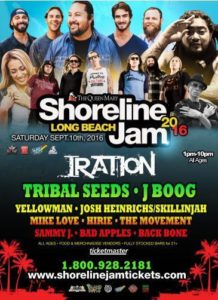 Now, entering its 6th edition, the Shoreline Jam Reggae Festival in Long Beach honors the best and brightest talent in the genre every year. And, this year’s lineup remains consistent with the tradition and heritage of the prestigious California reggae festival.

The 2016 Shoreline Jam Reggae Festival will feature performances by Iration, Tribal Seeds, J Boog, Yellowman, Josh Heinrichs & SkillinJah, Mike Love, Hirie, The Movement, Sammy J and more. The 2016 edition honors the legendary talent from Jamaica, which paved the way for so many of these American acts with the inclusion of “King” Yellowman, as well as some of the leading acts from the United States with Iration, Tribal Seeds and J Boog, among others.

Shoreline Jam will also will also feature some of the top talent from the islands with headliners Iration, from the Big Island of Hawai’i and J Boog, who spends a good portion of his time off the road on O’ahu, as well as Sammy J from Auckland, New Zealand.

The 2016 edition of the Shoreline Jam will take place on Saturday, September 10th at on the banks of the historic Queen Mary cruise ship in Long Beach, CA.

General Admission tickets are currently available, starting at $45 for the all-day event.

For more information on the 2016 Shoreline Jam, follow the links below.