Las Vegas is known to host the biggest events in entertainment and sports. Now, reggae has the spotlight.

Since 2002, the Reggae in the Desert has grown by leaps and bounds. The talent featured, and the overall depth of the brand and festival has increased exponentially each year. 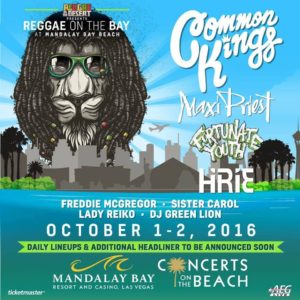 Now, the Reggae in the Desert brand has expanded their reach, presenting the 2016 Reggae on the Bay at Las Vegas’ Mandalay Bay Resort. Voted Las Vegas’ best outdoor music venue, the beach at Mandalay Bay will host some of the biggest names in reggae, both in the United States and internationally.

The artist lineup revealed headliners, Common Kings and Maxi Priest, as well as top-tier supporting acts, Freddie McGregor, Sister Carol, Fortunate Youth and Hirie, among others. The two-day festival in Las Vegas will take place on October 1st and 2nd.

For more details and ticket pricing, follow the links below for.