SOJA is always on the road, playing over 200 shows a year, and now has new 2016 dates planned.

There might not be a more recognizable band in the roots-rock-reggae touring circuit than Grammy nominated, American based band, SOJA. The Washington D.C. area band is the quintessential international touring outfit. Packed arenas, open-air amphitheaters and over-capacity night clubs have become the norm, but it has been over 15-years in the making. 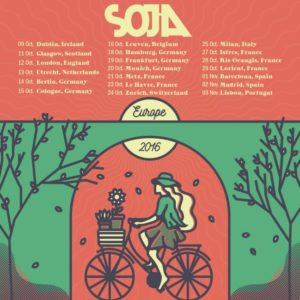 From playing locally to headlining major music festivals across the globe, fans in their respective countries now anxiously anticipate the next SOJA tour stop.

After spending the spring season in Central America and South America, including perhaps the band’s most loyal following in Brazil, SOJA is currently touring the United States with fellow contemporary reggae pioneers, Slightly Stoopid on the Return of the Red Eye Tour. The summer tour will run through August 28th, featuring shows in New York, Boston, Chicago, Philadelphia, and many more.

Following the conclusion of SOJA’s summertime supporting slot to Slightly Stoopid, the D.C. natives will “cross the pond” to Europe, beginning October 9th in Ireland. One of the major highlights for SOJA’s upcoming tour will be the band’s first time performing in Scotland. From October 9th to November 3rd, SOJA will perform live in England, Netherlands, France, Germany, Belgium, Switzerland, Italy, Spain and Portugal.

Most bands that call the United States home, struggle to draw impressive numbers in international markets. SOJA, is not one of those bands. In reality, SOJA is a far bigger band internationally than they are in the United States. Not to be misunderstood, SOJA is very successful in the United States, and most bands in America strive to be as prominent from city to city as SOJA is. That sentiment just puts emphasis on how eye-catching a SOJA performance in Europe, South America, the Pacific Islands and across the globe truly is.

With SOJA, the touring circuit feels more familiar than their home, and rightfully so. There are not many, if any, bands that tour more consistently than the American reggae band. No matter what part of the globe you reside, SOJA will be performing in your neck of the woods.