One of the leading American based roots-reggae-dub outfits has announced a new album release and tour.

John Brown’s Body is a seminal roots-reggae band that has influenced many of the biggest contemporary American reggae acts of our time. Formed in Ithaca, New York in 1996, at a time when there wasn’t popular demand for reggae bands to tour in the United States, John Brown’s Body was one of only a handful of American based reggae bands that began to tour nationally. 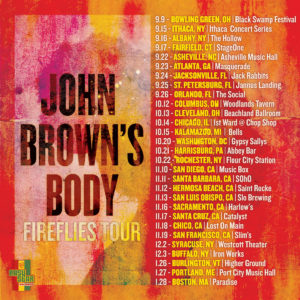 With two-decades of experience, John Brown’s Body, or simply, JBB has achieved numerous accolades throughout their career. Beginning in 1996, the band’s first album All Time was featured as one of “Top 10 Indie Records List” according to Rolling Stone.

After the release of Sprits All Around us in 2003, John Brown’s Body became a fixture on the national festival scene, performing at Wakarusa, Sierra Nevada World Music Festival, Reggae on the Rocks and Bob Marley Day in Florida, alongside Lauryn Hill, among others.

More recently, JBB earned the top spot on the Billboard Reggae Chart and iTunes Reggae Album with the releases of Aplify (2008), JBB in Dub (2012) and Kings and Queens (2013).

Still riding the wave from Kings and Queens and the subsequent remix album, Kings and Queens in Dub (2015), JBB has remained relentless on the road, performing throughout the United States, the UK, Europe and New Zealand over their career.

Now, as the veteran band has reached the commemoration of 20-years, with perhaps more trials and tribulations than one would describe as typical, John Brown’s Body has announced the release of their latest studio effort, Fireflies. The new album will be released on September 9, 2016, via Easy Star Records, an independent reggae label based out of New York.

John Brow’s Body gave fans a sneak peak to Fireflies, premiering the track “New Fashion” on Billboard. In an interview with Billboard, lead singer Elliot Martin describes the depth of the latest song as, “about nostalgia and looking forward at the same time. There’s a ton of references to old songs and dances; Lots of words and phrases from 80’s dancehall songs. It’s hoping for peaceful fun in the dance, and a wish to bring some of the old-style good vibes to the modern listener.”

For the band’s 11th studio album, John Brown’s Body enlisted the services of Craig “Dubfader” Welsch and recorded Firflies at Welsch’s Rear Window Studio in Boston. JBB and Welsch have worked together previously under mutual side project, 10ft. Ganja Plant, which features many musicians, past and present, from John Brown’s Body.

Currently, John Brown’s Body is on the road, performing in Seattle, Portland and Alaska, as well as, Grassroots Festival in New York. Coinciding with the Fireflies album release, JBB will embark on a nationwide tour on September 9th. Some of the tour stops will include, Atlanta, multiple dates in Florida, Chicago, Cleveland, eight shows up and down the California coast, and the tour finale in Boston.

For more details on John Brown’s Body, the new album, and all upcoming tour dates, follow the links below.