Reggae is enjoyed by people all across the globe. Lately, there’s been a rise of reggae shows in Alaska.

Back in June, the state of Alaska hosted their first ever Island Reggae Music Festival, taking place in the capital city of Anchorage. One of the major radio personalities in Alaska, Don Megga of 92.9 KFAT, has been instrumental in the growth of reggae music in Alaska. 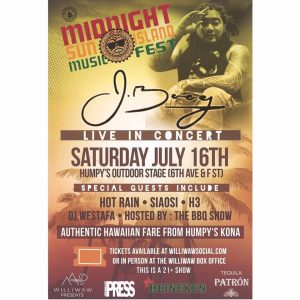 On a recent TV interview with the local NBC affiliate in Anchorage, Megga stated, “It is all about entertainment. When was the last huge music festival you have heard of with multiple artists featured in it?” Megga continued, “So, I wanted to bring some quality family entertainment that we can all enjoy an entire day of fun and entertainment for the whole family.”

Although, this most recent Island Reggae Music Festival in Anchorage is the most recent showcase for reggae music in America’s most northern state, it was not the first performance in Alaska.

Many bands and artists within the reggae music circuit rarely ever venture north of Vancouver in Canada. The touring itinerary typically stops Seattle or Tacoma in the north and heads east for the midwest or southwest to Colorado and Texas.

Recently, more and more bands have included Alaska in their touring schedule and festival circuit. For the first time in its history, the Vans Warped Tour set up shop for their day-long punk-rock-alternative-rock music festival at Sullivan Arena in Anchorage.

The reggae-rock genre has been traveling to Alaska as far back as 2011, when Slightly Stoopid performed in Anchorage for the first of multiple return trips. In a previous interview, Slightly Stoopid singer and guitarist Kyle McDonald stated, “Anchorage, you have a beautiful city. You take care of your place. It is just beautiful in Alaska.”

In recent years, 311, Pepper, Iration, Fishbone, and more and more reggae acts have performed in America’s 49th state. The next performers in Alaska will be J Boog, Hot Rain and Siaosi on July 16th, followed by East Coast veterans John Brown’s Body on July 30th.

If the recent spike in reggae concerts is a hint, perhaps Alaska is the next hotbed for reggae music in the United States.