Bermuda’s reggae export, known as Collie Buddz, will begin his tour dates in the U.S. this week.

Over the past twelve months, Collie Buddz has been one of the more active artists in the reggae genre. Over that time frame, Collie Buddz released his Blue Dreamz EP last September, was featured as a special guest on the hit track “Smokin’ Love” from Stick Figure, performed a headlining slot at New Zealand’s One Love Music Festival, and also appeared as a special guest alongside tours with SOJA, Rebelution and the hip-hop group, Bone Thugs-N-Harmony, amongst many others. 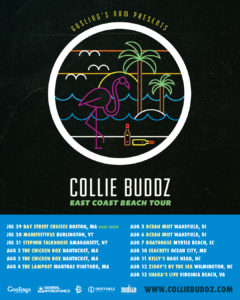 Most recently, Collie Buddz had a summer touring schedule, which featured performances throughout Europe, including festival dates in Netherlands, headlining club dates in the United Kingdom, and at Germany’s SummerJam Festival, arguably the biggest reggae festival in the world.

Now, Collie Buddz is set to perform live and direct in the United States. Collie Buddz will begin his East Coast Beach Tour on July 29th in Boston, and will continue on with shows in New York, Rhode Island, Maryland, North Carolina, South Carolina, Virginia and Florida.

Collie Buddz will also be a featured performer at Thunder Vibes in Sacramento alongside Michael Franti, Iration, Common Kings, Hirie and many more.

True to his form, Collie Buddz has remained active, while fans across the globe take in the sounds of his sweet reggae music at live shows.