The original King of Dancehall, Jamaica’s own Yellowman is back on the road, featuring tour dates in America.

Kingston, Jamaica’s Winston Foster, was born in 1956, growing up in a Catholic orphanage and was seen as an outcast due to having Albinism. However, Yellowman quickly rose to fame in the early 1980s with his album releases Mister Yellowman (1982) and Zungguzungguguzungguzeng (1983). 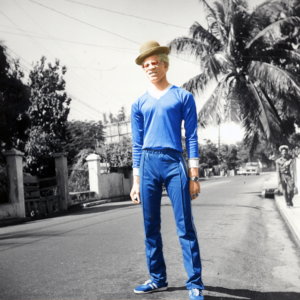 Yellowman is known for being the first dancehall artist to be signed by a major American record label, signing on with Columbia Records.

During the early stages of Yellowman’s musical career, it was stated that, “Listening to Yellowman sing is like watching Michael Jordan play basketball. He knows he’s got it, you know he’s got it, and it’s a trip just experiencing him perform.”

Now, at the age of 60, Yellowman still possesses that it factor. Although the road has been tough for the dancehall artist. At the very same time that Yellowman found success in music, he was diagnosed with skin cancer, which later spread to his jaw.

Requiring surgery to remove the tumor, this procedure permanently disfigured the artist’s face.

However, music, especially in the reggae genre, is not about looks. Music is about the sound, the message and the performance. Still to this day, Yellowman puts on one of the most energetic performances of any band or artist, regardless of his age.

Throughout Yellowman’s career, his music has been far reaching, not just in terms of distance on his international touring schedule, but spanning various genres and popular culture, as well. Yellowman’s music, specifically the songs “Nobody Move, Nobody Get Hurt” and “Zungguzungguguzungguzeng” have been sampled and featured in tracks by Easy-E of NWA, Sublime, KRS-One and many more.

As the calendar continues to flip from year to year and month to month, it is a sure bet that Yellowman is performing live, whether it be in Europe, the Caribbean, South America or the United States. This summer includes the return of Yellowman to the United States.

On Friday, July 29th, Yellowman will be a featured performer at Hawaii’s annual MayJah RayJah Music Festival at the Waikiki Shell in Honolulu, followed by a performance on Maui on the 30th. The month of August will feature Yellowman performances in California, New York, Florida, New Jersey, Connecticut, and in Toronto.

As Yellowman approaches senior citizen status, his music and live performances still remain timeless. With all the trials and tribulations throughout his career, Yellowman is still the King of Dancehall.

As Yellowman said, “I was made to thrill people. As long as I have a tongue in my head lyrics will flow till I’m dead.”

Video: Yellowman – “Nobody Move, Nobody Get Hurt” (Live)