Fresh off of her recent release, Sara Lugo will take her music on tour throughout Europe this summer.

Sara Lugo, born in Munich, began her career in 2003, when she was just 15-years-old. Lugo first sang backings in the studio of her Producer Umberto Echo. Two-years later, Sara Lugo released her first song as a solo artist on a remix album of the world-music group Quadro Nuevo. Since then, Sara Lugo has released three full-length albums, including her latest studio effort, Sara Lugo and Friends. 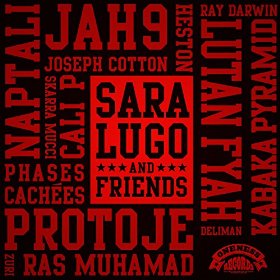 The 14-track album was released on March 25th via Oneness Records. Sara Lugo’s vocal range and lyrical quality is self-evident, but a who’s who list of guest singers is the precise reason why Sara Lugo and Friends has been a major catalyst in the singer’s career.

Although listeners may have already heard many of the songs from Sara Lugo and Friends on previous releases by other artists, compiling all of these duets on one record displays Lugo’s range with various artists’ style and chemistry.

Following a spring of international tour dates, which featured multiple gigs in France, Spain, Panama, Mexico, and a performance at the Sierra Nevada World Music Festival in California, Sara Lugo will return to Europe for festival dates at SummerJam in Germany on July 2nd, Reggaeland Festival in Poland on July 9th, as well as five upcoming shows in France.

The upcoming tour dates will feature Sara Lugo backed by the Next Generation Family band, performing your favorite tracks from her most recent release and her entire catalogue.

For more information on Sara Lugo, her new album and a full list of tour dates, follow the links below.