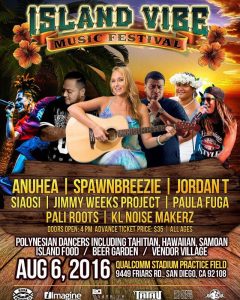 Many of the artists and bands featured on this year’s Island Vibe lineup will be performing new and recently released new singles, or even, full-length albums.

The one-day festival, will feature Polynesian dancer, including Tahitian, Hawaiian and Samoan styles, as well as numerous vendors, highlighting island and local food, beer gardens, and numerous apparel and clothing line pop-up shops for the patrons many desires.

The third annual Island Vibe Music Festival will take place on Saturday, August 6, 2016. The host venue for the one-day festival will be Qualcomm Stadium at the practice field for the San Diego Chargers, of the National Football League.

Tickets are currently available for $35 and the event will be available for all ages, featuring a family friendly environment to enjoy the day’s festivities.

For more information on the 3rd annual Island Vibe Music Festival, follow the links below.

Video: Anuhea – “Island Inside Me”