Sprouting from San Diego, CA in 2005, the award-winning reggae group grew from an opening or supporting act to a full-fledged national touring outfit, selling out venues with routine. In 2013, Tribal Seeds performed outside of the United States for the very first time, performing live in Lima, Peru. 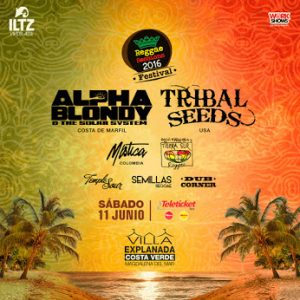 In the past, Tribal Seeds have toured away from the continental 48-states in the past, playing extensively in Hawaii, including a headlining appearance at the MayJah RayJah Festival in 2012, as well as playing in Guam on multiple occasions. Now, Tribal Seeds have their passports ready for another trip to the southern hemisphere.

Tribal Seeds has been known to collaborate with touringmates and festival co-headliners in the past, such as Don Carlos, Mykal Rose, Vaughn Benjamin of Midnite, Kyle McDonald of Slightly Stoopid, and Eric Rachmany of Rebelution. The fans of Tribal Seeds would surely enjoy a new collaboration with Alpha Blondy for the next album.

As for an upcoming album release for Tribal Seeds, co-founder of the band, Tony-Ray Jacobo has recently stopped touring with the band and has since focused on the production of the new album, stating: “As some of you may have noticed, I am currently not on tour with Tribal Seeds. I’ve decided to step away from touring and playing shows to focus on producing the next [Tribal Seeds] album. A friend of ours, Luis Castillo (Big Mountain/P.O.D.), has taken my place on stage. Thank you all so much for your continued support. I’ll be working hard to bring you the best Tribal Seeds album yet!”

There is not telling if Tony-Ray Jacobo will be performing for these festival dates and summer tour alongside Sublime with Rome and The Dirty Heads, or continuing to remain in the studio.

Before the year is done, the two founding brothers of Tribal Seeds will reunite on stage, once again. Perhaps, when Tribal Seeds performs at the Closer to the Sun Festival in Mexico this coming December? Fans will just have to wait patiently.