One of the fastest rising musical acts in the reggae genre is a former professional athlete turned reggae artist.

Omari Banks, the son of Banxie Banks (known as the Anguillan Bob Dylan), is a former professional cricket player for West Indies. Omari became the first Anguillan to play Test cricket for the West Indies in 2003. In 2011, Omari Banks began pursuing a similar path as his father. 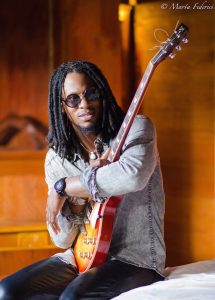 In his musical career, which spans just five years, Omari Banks has been featured as a special guest on a European Tour for Morgan Heritage, the 2016 Grammy Award Winners for Best Reggae Album, performed at the prestigious South By Southwest Festival in 2016, released a top ten album (Move On – 2015) and a top ten single “No Point to Prove”, which features Peetah Morgan of Morgan Heritage, as well as being featured on Cablevision Systems Corporation, an American cable television company serving areas surrounding New York City and in over 22 Caribbean territories, Quebec and Ontario Canada.

The TV appearance was a filmed concert in Banks’ native Anguilla, which has shown a reach of over 17 million viewers.

The New York Times recently wrote, “Omari Banks sounds like a cross between Bob Marley and Bob Dylan.” It is safe to say, that the spotlight has remained on Omari Banks as the entertainer has transitioned from an athlete to a musician.

Continuing to ride the wave of momentum, Omari Banks premiered his latest single on May 12th, “System Set”, featuring Duane Stephenson. As with many of Banks’ songs, the lyrics are powerful and self-anylyzing for the listener.

The chorus for “System Set” unfolds with one question after the other: “Do you know what you are fighting for? Did you even the score? Are you willing to start back at zero?”

“System Set” is the follow up single release to the March 11th release of “Me & You”. “System Set” is not yet available for purchase on iTunes or other digital music outlets, but when it is officially released, the trend has been set by Omari Banks to reach the top of the charts.

For more information on Omari Banks, follow the links below.