Building an international following is a difficult task, but The Skints are planting the seeds in the United States.

Labeled as “the torchbearers for modern British reggae music”, the London based band, The Skints, have been an ever-growing commodity in international reggae. After releasing their debut album, FM in 2015, which debuted at Number 7 on the UK Independent Chart and Number 5 on the Billboard Reggae Chart, The Skints went on an expansive tour throughout the United States. 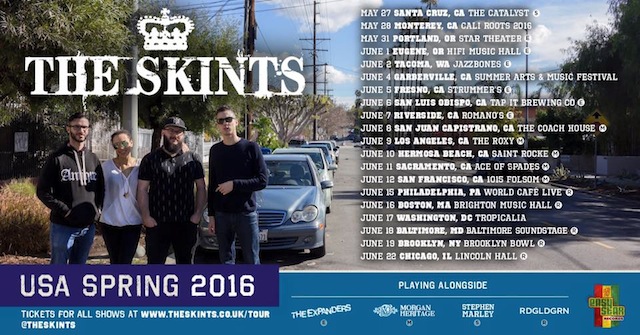 Following tours throughout the United States and Europe in 2015-16, the spring and summer will be spent back in America. Beginning on May 27th, The Skints will hit the California coast in Santa Cruz and their second-straight appearance at the California Roots Music and Arts Festival the very next day. The tour will include twenty shows in 27-days, including tour stops in Oregon, Washington, Pennsylvania, Massachusetts, Maryland, New York, Washington D.C., Chicago and eleven total dates in California.

For more information on The Skints and all upcoming tour dates, follow the links below.