One of the longest tenured bands in the reggae genre will return to the United States, beginning in May.

With a career that spans nearly 30-years, Gondwana is one of the most transcendent international reggae bands. Gathering their name from the ancient super continent that incorporated present-day South America, Africa, the Arabian peninsula, Australia, Madagascar, India, and Antarctica, the sound of Gondwana is as global as their name sake. 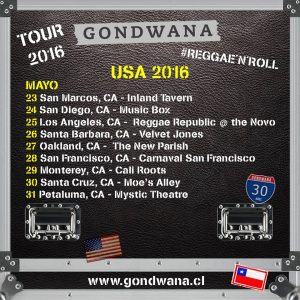 Not every band that is among the elite ranks in their own country, or own region, receives a warm welcome when performing in Jamaica. In truth, not many bands ever receive an invite to perform on reggae’s sacred land. Gondwana, a band that calls Chile home, has been lucky enough to accomplish that feat in their career.

Now, Gondwana is preparing to perform at one of the United States’ premier reggae festivals, California Roots, on May 29th. Gondwana is currently making their way through Central America, performing throughout Mexico from May 12th through the 21st, before kicking off their North American tour leg.

During Gondwana’s upcoming tour dates in North America, supporting acts for the three-month long tour will include Katchafire from New Zealand, Nattali Rize, the lead singer from Australian band, Blue King Brown, Fayuca from Phoenix, Arizona, as well as Los Pericos from Argentina.

Gondwana will be traveling from coast to coast, north and south with concert dates in both the United States and Canada. So, be sure to find the show in your neighborhood.

For more information on Gondwana, follow the links below.