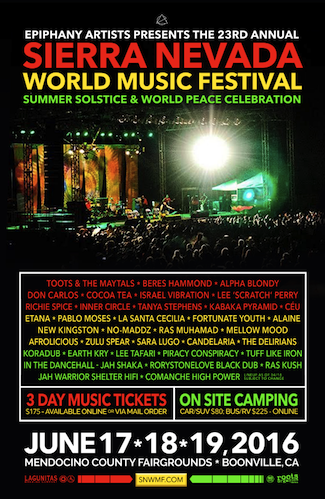 In all, SNWMF will feature 43 bands and artist over the three-day weekend in Boonville, California. The annual family reunion for many is known as being on of the most positive festival with an incredibly irie vibe. With the help of Epiphany Artists, the 2016 festival is set to be one of the best edition yet.

The festival will continue to feature two outdoor stages and a late night Jamaican style dancehall, featuring artists from around the world. Food and merchandise vendors will also do the same, offering delicious edibles, crafts and art from West Africa, Indonesia, Jamaica, Ethiopia and India.

The 23rd annual Sierra Nevada World Music Festival will be held on three-consecutive days, from June 17-19, 2016. Ticket prices for three-day passes are currently available at $175 for three-day passes. Single day tickets are available, starting at $60 for Friday, $75 for Saturday and $70 for Sunday, respectively.