A major part of the Jamaican reggae revival this generation has announced new North American tour dates for 2016.

Oje Ken Ollivierre, popularly known by his stage name, Protoje is among a group of young reggae artists from the “oval rock” in the Caribbean branded as the Reggae Revival. Chronixx, Kabaka Pyramid, Dre Island, Jah9, Jah Bouks, Kelissa and the aforementioned Protoje, has ignited a torch in people’s hearts and is confidently lighting the path for an entire generation of youths to rediscover roots and culture within reggae music. 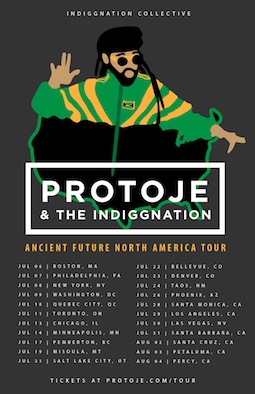 Continuing to ride the wave of momentum from his Ancient Future album release, Protoje will once again hit the road to spread the sound of his native Jamaica to the masses. After spending the spring months touring as direct support to American reggae band Rebelution, Protoje will begin his own headlining tour on July 6th in Boston, before performing in major metropolitan cities such as Philadelphia, New York, Chicago, Washington D.C., Denver, Phoenix, Las Vegas and Los Angeles. The upcoming North American tour will also feature tour stops in Toronto and Quebec City, along with many other auxiliary markets in the United States.

Prior to embarking on his own headlining tour, Protoje will be a featured performer at numerous music festivals across the globe, including California Roots Music and Arts Festival on May 29th, Glastonbury Festival in Somerset, United Kingdom on June 24th, Reggae Fever Festival in Netherlands on June 25th and 26th, Couleur Cafe Festival in Belgium on July 3rd, as well as, Reggae on the River on August 4th, concluding his United States tour dates.

Whether you are in Europe, Canada or the United States, Protoje will be in your area, spreading the sounds of his native Jamaica to the masses.