The Island Sound had the honor of speaking with Saritah, and will publish the full interview this Friday.

On May 6, 2016, Saritah, the Australian-turned-global conscious roots artist, will release her latest single, “Inner Wealth”. The new track celebrates the liberation and true wealth that is nurtured through devotion to a path of evolution of self. 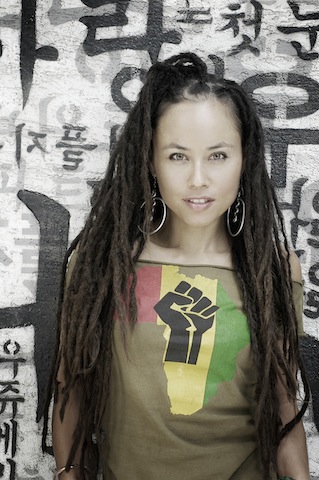 In the upcoming interview, Saritah explains the background of the new track stating: “The instrumental part of the song is called the Fyah Bless Riddim and when I heard it, I just loved it. I just loved the vibe. The chorus started to come through, which is my absolute favorite. When you have the words and melody and rhythm coming through just right, that is when you know you really have something special. The chorus for ‘Inner Wealth’ was one of those tunes.”

Saritah continues, “The song is really about the evolution of consciousness, that I’m experiencing, but also experiencing and seeing it in the world at large.”

The captivating video, shot entirely on the lush Puna Coast on the Big Island of Hawai’i, allows nature to reflect and represent the brightening of self, the fresh air of inner reflection, the peace that gives everlasting wealth. In the upcoming music video, the beautiful slow motion shots emphasize a key feeling of the song being present to each moment on this journey of life.

In regards to shooting the upcoming music video, Saritah shares, “The video was made by Grototote, and I met him through Nahko (Nahko and Medicine for the People), while they were touring in Australia a couple of years back. When I knew I was going out to Hawai’i, and I had this song bubbling on the stove, I linked up with him. It was just one day of filming. I did my own makeup for the shoot. We did it in a super roots style. There are a lot of slow motion shots of the nature, the flowers, the coastlines, and just captures the vibe of the song of being present to the moment. The video shows the outer wealth of nature reflecting the inner wealth of one’s self.”

Other topics discussed in the upcoming interview include Saritah’s world travels, including spending time in Mozambique, performing live internationally in places where English is not the first or even second language, collaborations with Spain’s Green Valley Band and “bucket list” artists, performing at some of the largest reggae festivals in the United States, like the Sierra Nevada World Music Festival and California Roots Music and Arts Festival, as well as Saritah’s new bilingual music project, Del Corazon.

All of these topics and many more will be discussed at length in the published interview on Friday, May 6th. Be sure to comeback to read the full-length interview and view the premiere of Saritah’s new music video, “Inner Wealth”.